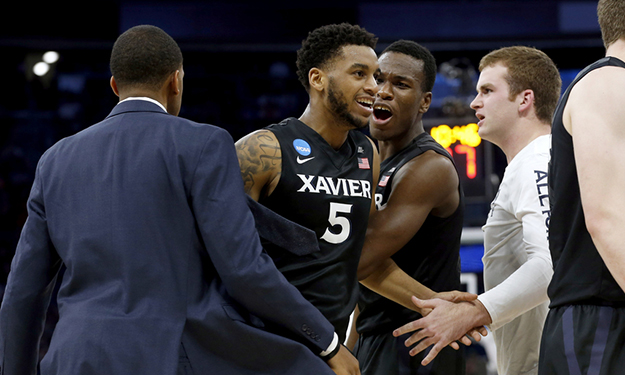 If you stepped inside the Xavier University strength and conditioning facility during the men’s basketball team’s workouts this past summer, you wouldn’t notice anything out of the ordinary. Players are working hard, and Matt Jennings, MS, MSCC, now in his ninth year as a Head Strength and Conditioning Coach, is encouraging them on.

But follow the athletes beyond the clang and bang of the weightroom, and ordinary no longer applies. You’ll see players crawling on the floor, holding downward-facing dog poses, and exposing their bodies to subfreezing temperatures. With the goal of pushing players outside their comfort zones, Jennings immerses them in jiu jitsu, pro-style training, yoga, cyrotherapy, and several other outside-the-norm activities.

“We are truly invested in both the psychological and physiological health of our student-athletes,” says Jennings. “This means putting them through a variety of training modalities that challenge, empower, and improve the total person and athlete.”

Perhaps the most untraditional of these is jiu jitsu, a martial art in which fluid movement is a key part of training. Jennings contracts with Randal Burton, a black belt and instructor at nearby Gracie Cincinnati Jiu Jitsu, who works with the players three days a week for 30 minutes prior to their regular strength training.

“After conducting Functional Movement Screens on our players, we realized they could benefit from increasing their total-body joint mobility,” says Jennings. “Randal designs a program for us that uses jiu jitsu movement principles but does not include any hand-to-hand combat. The challenges of fluidly moving on the mats greatly benefits our athletes.”

According to Burton, it also helps them build mental strength. “To the outside world, the movements might seem awkward or goofy or even juvenile, but I’m trying to make these guys comfortable in hell,” Burton told Cincinnati.com. “Young, college-aged, men – they want to be badasses, and they’re already studs on the basketball court. This is teaching them confidence in a new area.”

Jennings’ unique offseason workouts do not stop there. At Ignition APG in Mason, Ohio, which trains a long list of NFL clients, the focus is on pushing players at an intensified level. “We take advantage of their expertise in training NFL athletes to develop our own players’ speed, agility, quickness, plyometrics, and overall athleticism,” says Jennings. “In addition Ben Creamer. [CSCS, USAW, FMS,] Ignition APG Performance Director, trains our players in boxing/focus mitts for conditioning and hand-to-hand combat drills, which relates to positioning for rebounding.”

Another big focus of the summer training plan is recovery, and Xavier uses several methods. Yoga, for instance, has been a staple of the program for many years. “Our instructor, Lori Allen, designs and implements a routine that incorporates relaxation and breathing techniques to improve the overall mental and physical health of our athletes,” says Jennings. “The mind/body connection, iso-lateral strength endurance and balance, proprioception, and awareness are just a few of the numerous benefits.”

To cool players down after the workouts, Jennings takes them to Arctic Blast Cryo in Mason, Ohio, where they step into small chambers that have temperatures ranging from -190 to -270 degrees Fahrenheit for a few minutes. This type of flash-freeze claims to increase circulation by having the body react similarly to how it would with hypothermia. The outcome is decreased muscle soreness and boosted energy levels.

So how has Jennings found the many outside providers he works with? Through networking, reaching out to others, and relationship-building. The vetting process he employs for each one is extensive.

“Before bringing anyone on board, we attend their classes and evaluate the potential contractors,” he says. “Subject knowledge, teaching ability, room presence, voice projection, group control, temperament, energy, and attitude are all important qualities that we look for. The contractors must reflect an extension of our coaching staff and align with our philosophy.”